Cosmetic nose surgery (nose job) is a procedure to straighten, reshape, or open nose passages. Because nose is a central feature of the face, many patients wish to improve their appearance by changing the shape or size of their nose. Surgical experts can recommend measures, which include the following:

Septoplasty seeks to straighten the nasal septum (cartilage) thus improving breathing through the nose. There is no alteration in the external nose appearance during this surgery.

Rhinoseptoplasty (surgery of the nose and nasal septum) – this surgery includes both the correction of the external nose appearance and the deviated nasal septum.

The surgery is mostly done under general sedation. It may also be performed using intravenous anesthesia. This procedure may be carried out at the same time as other cosmetic facial procedures. Usually nose surgeries last from one to two hours and patients have to stay one night at the clinic.

The procedure involves making incisions inside the nose or through small cuts beside the nose. Any scars are usually out of sight or inconspicuous. The skin is separated from the supporting bone or cartilage, which is then reshaped to the desired profile. Natural elasticity of the skin allows it to take its new position. To conclude the procedure, a small splint is placed over the nose for support and to reduce swelling. Gauze may be packed into the nose in order to to absorb bleeding , and is removed after one or two days.

The patient is able to recuperate, with adult assistance, at home or in the hotel. After rhinoplasty the patients are recommended to stay 5-10 days in Lithuania. The splint is taken out after five to seven days. Stitches to close incisions remain in place for about ten days. Swelling and bruising around the nose and eyes is normal for several weeks following the surgery. Temporary loss of feeling or sense of smell usually returns gradually over this period. Swelling may take as long as six months or more to fade completely. Depending upon the final result, a second, revision procedure may be required to correct minor irregularities. In rare cases, infection or bleeding may delay the healing or result in scar tissue. Thick or oily nose skin may be less adaptable in cosmetic surgery.

Illustration of the procedure 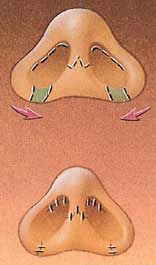 Sample before & after photos:

Please contact us to see the full gallery.
Top

If the treatment is compensated by the local health insurer, EU directive 2011/24/EU allows to ask for reimbursement even if you over go the procedure in another member state. Contact your healthcare insurance company for more details.
The table gives rough all-inclusive guide prices, which include everything necessary for the treatment, as well as help with the trip, transportation within Lithuania, etc. Only flight & hotel (when discharged) costs are excluded. When several surgical operations are carried out together, huge discounts are applied. The exact price is indicated during the free and non-binding consultation with the doctor.

Prices in £ might vary due to exchange rate fluctuations (against the €).

Do you need any further details?

Inquire Us »
This information was prepared by the doctors of our partner plastic surgery clinic. It is forbidden to copy and use the information without the permission of the authors.

Get a quote & more info

Your message was successfully sent. Thank You! 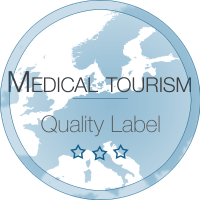